The Melmac Era of Kitchenware Is Still With Us Today

Sometime in the late 1930's, the American Cyanamid Company began using a raw material called Melamine to produce kitchenware.  This was a prewar time and a lot of resources were being diverted towards the war effort. A push was in place to find alternate materials for kitchenware. 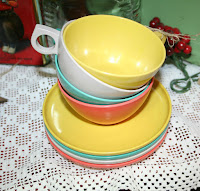 Suddenly, plastic became the wave of the future!  The Melamine product was extremely cheap to obtain thus  the birth of "Melmac" kitchenware.  They were very picky about who could use the name "Melmac" and who could not; it all had to do with the molds that were used.  At any rate, we benefited greatly from all their effort!  We had dinnerware that could withstand heat and would not break easily.  Aside from the practical side of things, there is the aesthetic value  that still excites us today.  They made these dishes in a full range of beautiful colors from the 1930's through the 1970's.  I think my favorite era for these dishes was the 1940's - 1950's.  Those great mid century colors were 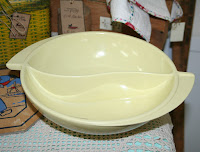 prevalent and they show up everywhere in these dishes.  Yellows, coral, turquoise, pink and white.  Not only did they produce beautiful colors but they created dishes with real style.  Check out this lowly divided vegetable dish.  Way too cute!  Because they made so much of this stuff, it can easily be found today.  Times have changed though!  Don't put one of these little gems in the microwave as it will shatter.  Enjoy collecting and using them daily.  One of the big manufacturers of this dinnerware was TexasWare.  You still see a lot of this around and they are still very collectible. Choose a color or manufacturer and collect their full line.  You will find slight shade difference in colors between different manufacturers so be careful if you are focused on a particular shade.   I found examples of solid color pieces, but there is a huge variety of printed patterns as well. You can set a really cute breakfast or lunch table with a variety of these colors.  Use vintage linens to tie the theme together!

Posted by South End Antique Mall at 6:26 PM No comments:

Vintage cookbooks are one of my favorite things to find and browse through!  You always find 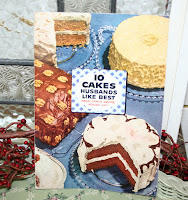 the recipes all marked up and notations made as to what was good and what was not.  Those thin little pamphlet style cookbooks, and cookbooks in general, have become a hot collectible.  Not just to own an "old" cookbook, but to actually use the recipes they contain.  Until the 1800's, most cookbooks were written by chefs to be used by chefs.  The first all American cookbook published was written by Amelia Simmons and was titled "American Cookery".  This one contained recipes for ingredients that were common to America.  Up until that time, cookbooks were written and published in England.  The recipes contained "a pinch" of that or a "sprinkle" of that until Fanny Farmer standardized measurements.  In the 1800's, these cookbooks also contained information about how to keep your house, set the table, how to make soap and home remedies, how to clean and skin wild game, etc.  I think I love the little pamphlet style and spiral bound cookbooks best.  They tend to have wonderful graphics on the front!  There are the ones that were printed specifically for a certain ingredient such as those pictured below for Eagle Brand Condensed Milk, Baker's Chocolate and Blue Ribbon Malt Extract.  Now I can see me using the Eagle Brand or Baker's chocolate cookbooks, but I had to look up what Malt Extract was.  Apparently it is a heavy syrup used in both baking and beer making.  The lady on the front of this cookbook made some amazing looking biscuits with it!  Notice how sweet and proficient they made her look with her hair all pinned up and a perky outfit topped with an apron. Again, the graphics really caught my eye. 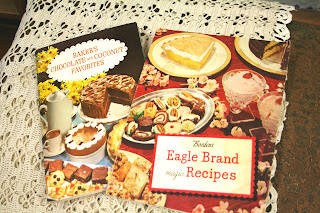 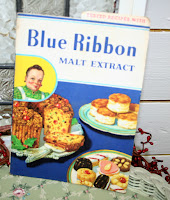 Cookbooks from extension services, fraternal organizations, church's, schools, etc., began to pop up.  These were usually a compilation of recipes that were the "favorite" of those members of that particular organization.  They were used as fund raisers so were sold to the general public.  These really are treasure trove's of favorite recipes and are great collectibles to have on hand and to use. 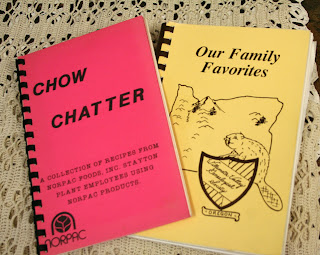 Take some time to browse through the cookbook sections in antique mall's.  You will find a terrific selection of these great old cookbooks that can still be used and enjoyed for both their recipes and their artwork. 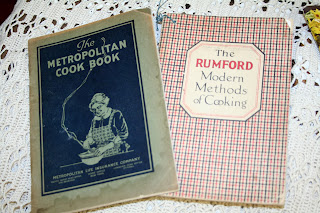 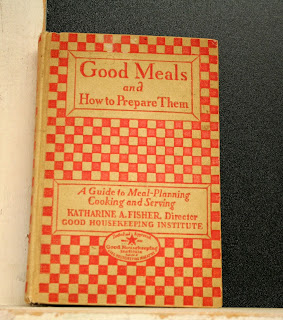 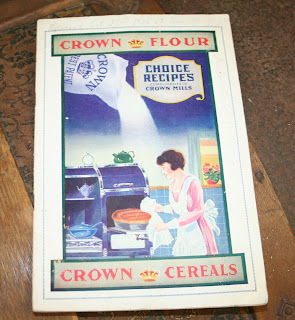 Posted by South End Antique Mall at 7:03 PM No comments: 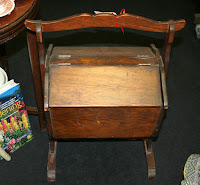 I am going to have to admit this in public!  I am a fanatic when it comes to vintage sewing boxes.  If I see one at a garage or estate sale, I just cannot pass it up.  I have to stop and check out the contents.  "Back in the day" you did not always have a department store handy or even enough money to purchase anything in a store.  You made due with what was on hand so it was very important not to waste anything.  This is where the sewing box comes in.  This is where your grandmother (or mother, depending upon your age) stashed anything and everything she thought she might need again.  It did not have to be a fancy wood box that looked like a piece of furniture.  It could be an old toffee or cookie tin (I love the graphics of old cookie tins).  It was what was inside that counted!  I have found such treasures as old tax tokens from Washington State.  Lots of hooks and eyes (you may not know what these are but they took the place of a button on a lot of

garments).  Tons of darning eggs.  I have actually practiced using one of these little things and they are pretty nifty.  Darning a small hole in a linen or sock was preferred to throwing the item out and losing the entire piece.  Seam binding tape, replacement shoulder straps, replacement garters, etc.  If you don't know what a garter is, you are sooooo lucky!  They are early torture devices used to hold up nylon stockings.  Heaven help you if one broke or came loose.  Lets just say, it was not a pretty sight.   I have found bone sewing implements to help thread elastic and ribbon through holes.  There are usually a few packets of needles present.  They were usually free "give away" samples printed with the local department or grocery store name and address.  Some of these needle packets are terrific works of art!  There were always little wood tubes filled with replacement sewing machine needles.  Lots of shears and scissors that have lasted decades and are still very useful. Little bits of embroidery floss and lots of wood spools of thread.  Bits and pieces of lace and fabric scraps waiting for the next quilt to be made.  And then of course, there are the buttons!  My favorite part!  Buttons!  You never threw out a totally worn garment with the buttons still attached!  They were removed and added to the button box. Buttons

are a topic all their own in another blog post, but suffice it to say, you can get lost in the world of buttons!  I drool and have to purchase the entire sewing basket if I find a Bakelite or old coat button!  If a member of the family served in the military, you will always find those old uniform buttons (which are collectible today).  You may find half finished tatting projects with the shuttle and thread still attached.   There was a way of making the most 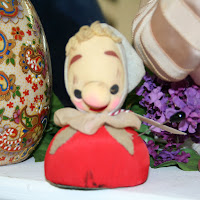 functional item look like a work of art.  Whimsical and beautiful pin cushions are a great example of this (the little lady to the right is a pin cushion with a measuring tape that you will find if you pull on her nose). My point is, we now live in a disposable world that does not take time to "repair" a garment or linen.  Sewing on a missing button is a lost art!  Maybe this is something we should look at carefully; maybe our ancestors had something special that we are missing.  Time to sit in a chair and visit while doing needlework or taking pride in being a "thrifty" homemaker for our families.  Don't pass up these little "time capsules".  They are so much fun to paw through and you never know what you will find!

Posted by South End Antique Mall at 6:04 PM No comments: 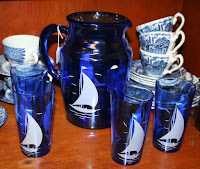 The beautiful weather that comes with summer gives us the opportunity for outdoor and casual dining.  Some of the glassware from the depression era through mid century are perfect for sprucing up a luncheon or picnic table!  This "Sailboat" pattern from Hazel Atlas is a great example.  They were made in about the 1930's and have such a distinctive design and classic color they are timeless.  Beautiful cobalt blue against a crisp white or blue checked tablecloth is a feast for the eyes!  Another beautiful pattern/color is the Royal Ruby Red made by Anchor Hocking from 1938 - 1960's.  It also has a distinctive color that makes any table look elegant and yet can be used for casual dining.  This Royal Ruby ball pitcher and glass set is beautiful!

The depression era did bring us some beautiful colors and designs in glassware and bar-ware, but so did the mid century years.  I think one of my favorites is this "Merry-Go_Round" set produced by Libby in the 1950's.  The tumblers are tall and frosted with colorful carousel animals running round the outside.  This one comes in a carrier that may or may not be original to the set but is still really cute!  The Raffia ware burlap tumblers from the 1960's are also colorful and make a nice casual addition to any dining table.  The anodized aluminum sets that are still out there are packed with beautiful colors and seem to last forever!  Sturdy tumblers that will be there for years to come.  All of this depression era and mid century glassware and bar-ware are still around today and should be treasured and used daily to bring color and interest to any table setting! 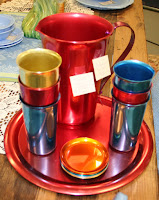 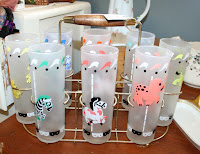 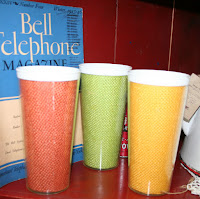 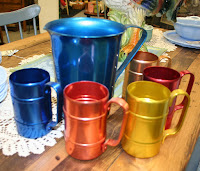 It looks as though we will not be having a parking lot sale on Memorial Day weekend! It is our anniversary sale and we are truly sad that it will have to be postponed but do want to make sure everyone is safe! We will let you know when anything can be rescheduled.

South End Antique Mall opened on May 11, 2005. We are housed in a historic old turkey hatchery/pickle factory in Aurora, Oregon. The building was built in 1919 and has had many lives. We have 29 vendors sharing over 16,000 sf of shopping space! Our layout is unique in that we are not slotted into cubicles but are setup so you can "meander" through the different spaces comfortably. Tons of free parking, free coffee and cookie's means you have no reason not to stop and visit!

If you are shopping for a gift and not sure what to get, try one of our gift cards! Just ask at the front counter for assistance.